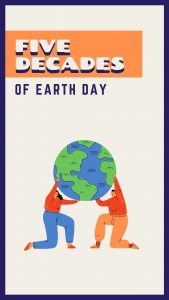 This year’s theme is climate action. It is important to learn more about what you can do to make changes in order to decrease your impact on issues such as climate change. We are seeing all kinds of movements arise about climate change issues. For example, people like Greta Thunberg are urging immediate action to be taken about climate change issues and has inspired people all around the world to take part in climate strikes. Everyone can make a difference when it comes to addressing climate change, whether it is global movements or changes in your everyday life. 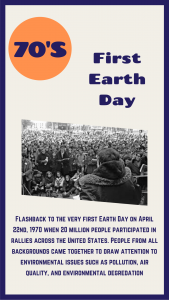 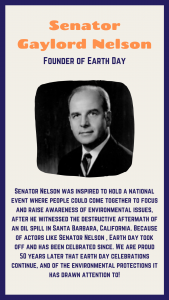 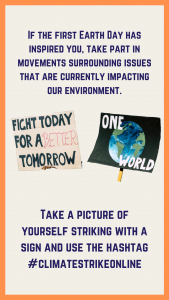 Flashback to the very first Earth Day on April 22nd, 1970 when 20 million people participated in rallies across the United States. People from all backgrounds came together to support a shared issue. Senator Gaylord Nelson from Wisconsin was inspired to hold a national event where people could come together to focus and raise awareness of environmental issues, after he witnessed the destructive aftermath of an oil spill in Santa Barbara, California. The first Earth Day inspired political action, such as the creation of the Environmental Protection Agency and the passage of the Clean Air, Clean Water, and Endangered Species Acts. Senator Nelson took a risk and because of that, he has inspired fifty years of Earth Day celebrations and monumental changes for the protection of the environment. If the first Earth Day has inspired you, take part in movements surrounding issues that are currently impacting our environment. For example, each Friday post a picture of yourself striking with a sign and post it to social media with #climatestrikonline to stay involved with the climate strike movement. 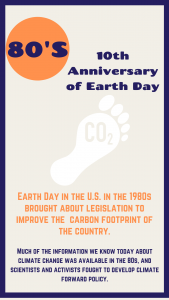 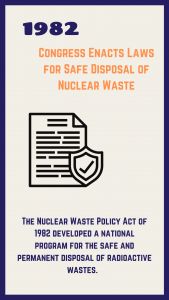 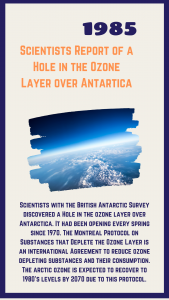 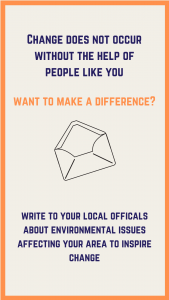 Earth Day Through the 80s

Earth Day in the 1980s brought about eco-friendly legislation. Most of the information about climate change today was discovered in the ’80s. This year’s Earth Day theme is climate action. The fight to make radical changes regarding climate change has been going on since the ’80s as scientists and activists fought to develop climate forward policies. In 1982, Congress enacted the Nuclear Waste Policy Act for the Safe and Permanent Disposal of Radioactive Wastes. This was important because Congress created a plan as to how to store nuclear wastes in a way that did not harm the environment or its inhabitants. In 1985, scientists with the British Antarctic Survey discovered a hole in the ozone layer over Antarctica. It has been opening every spring since 1970. The Montreal Protocol on Substances that deplete the ozone layer is an international agreement to reduce ozone-depleting substances and their consumption. The arctic ozone is expected to recover to 1980’s levels by 2070 due to this protocol. These examples of environmental protection legislation occurred because scientists and activists alike raised their voices to fight for sustainable practices. Change does not occur without the help of everyday people. If you would like to make a difference, write to your local officials about environmental issues affecting your area in order to create change. 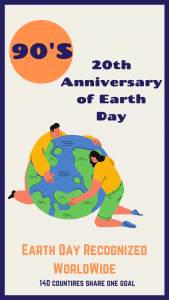 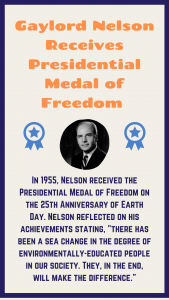 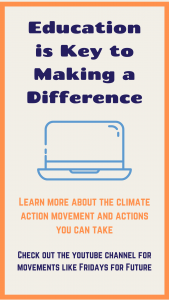 Earth Day Through the 90s

The 1990s turned Earth Day into a worldwide event with 140 countries participating in Earth Day activities. The first Earth Day started with 20 million people and grew to 200 million in just 20 years. Earth Day is meant to bring together people from all over the world because we all share a common goal. In 1995 Gaylord Nelson, the founder of Earth Day, received the Presidential Medal of Freedom. He was celebrated on the 25th anniversary of Earth Day and reflected on the day saying, “There has been a sea change in the degree of environmentally-educated people in our society. They, in the end, will make the difference.” Education is the key tool for making a difference in any kind of social movement. It is important to learn more about global and local environmental concerns and what you can do to take action. There is a lot of information available through environmental protection organizations such as Fridays for Future. They post YouTube videos that explain the current climate action movement. 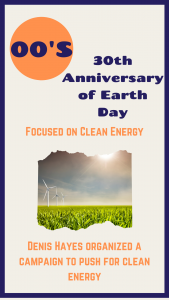 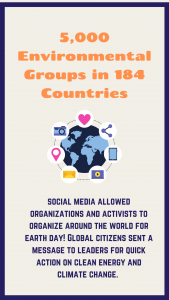 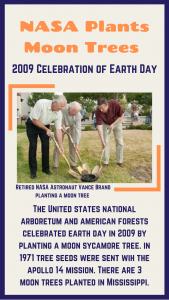 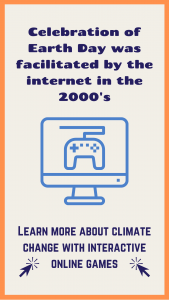 Earth Day in the 21st Century

The new millennium and 30th anniversary of Earth Day focused on clean energy. Denis Hayes, an environmental advocate, and coordinator for the first Earth Day organized a new campaign to push for clean energy and global warming. The internet helped to organize activists and organizations all around the world. On Earth Day 2000 there were 5,000 environmental groups in 184 countries. People from all over the world were sending a message to world leaders of the importance of quick action on clean energy and climate action. As Earth Day was becoming a global event NASA decided to finish a project they had been working on since the 70s. In 1971 tree seeds were sent to space with the Apollo 14 mission. In 2009, the United States National Arboretum and American Forests celebrated Earth Day by planting one of the seeds that had been to space. There are moon trees planted all over the United States and three planted in Mississippi with one at the Mississippi State University, one in Waynesboro, and one in Wiggins. Earth Day in the new millennium saw advancements in technology and the power of social media bringing together activists and organizations all over the world. A fun and interactive way to learn more about climate change is to play online games about such environmental issues. 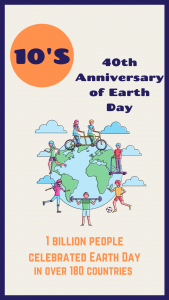 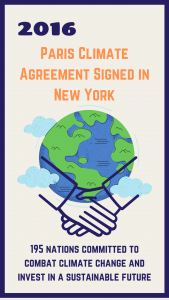 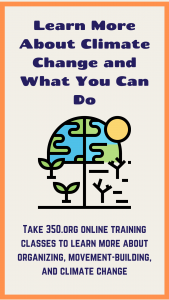 On the 40th anniversary of Earth Day in 2010, 1 billion people celebrated Earth Day in over 180 countries. As each anniversary of Earth Day passes more and more people celebrate Earth Day. Hopefully, this year’s Earth Day continues to increase Earth Day engagement. Power legislation was created in the ‘10s. The Paris Climate Agreement was signed in New York in 2016. 195 countries came together to commit to combat climate change and invest in a sustainable future. It created a global guideline to hopefully avoid dangerous climate changes by reducing greenhouse gas emissions. It was designed to help countries of all sizes and financial backgrounds to be able to deal with the impacts of climate change. It is important to learn about the potential effects of climate change. If you would like to learn more about organizing, movement-building, and climate change, take one of 350.org online training classes.

This post was authored by Green Week Coordinator Intern, Molly Longton. Originally from Mesa, Arizona, Molly is a senior sociology major and is minoring in environmental studies. Learn more about our intern program here.

Sustainability @ UM  @olemissgreen
Do you have a plan to vote on Nov. 3rd? The Office of Community Engagement is coordinating shuttles to polling loca… https://t.co/36XuTtVbZE
reply retweet favorite

Sustainability @ UM  @olemissgreen
Are you voting by absentee ballot in this upcoming election? The Office of Community Engagement can help you get yo… https://t.co/00429qA0uj
reply retweet favorite